In 1997 my co-founder, Amie Walton, and I began working with teen mothers in a support group setting. We had both been teen mothers, and we felt called to come alongside these girls. It was a shock to discover how many of them lived in fear, or hunger or pain in their own homes, and even more so to discover how many were actually homeless. We searched for a place for our young moms and their children to go, and found that there simply wasn’t any place for them. Most group homes were maternity homes, where a pregnant mom can stay and make a decision about whether to keep her baby or give the baby up for adoption. Shelters only took adult women. It was hard to believe that NO ONE would provide a place for these girls if they already had one or more children.

This was the beginning of the vision for Hope House Colorado. It became our goal to provide not only a safe, stable and loving home environment, but also to provide the tools each teen mom would need in order to become self sufficient. Most importantly, we wanted to provide them with hope. We wanted each young mom and child to know that there is no mistake too big, no past too heavy, that would make God give up on them. We wanted them to know that God loves them, and that He has a plan for their lives.

In August 2000, we formed a working Board of Directors and began to research other homes for single moms, locally and nationally. We spent the next three years developing a self-sufficiency program, learning how to run a non profit organization, and raising funds. In December 2002, we met the President of Rocky Mountain Housing, an organization that builds low-income housing. They had purchased a piece of land to build on that had a large ranch home on it. They offered us the use of the home to get Hope House up and running while they went through an annexation process that was expected to take two years.

In April 2003, we opened our doors in that red brick ranch, and began hiring our staff. In June we took in our first two teen mothers and their children. We spent the next nine months learning that what looks great on paper, needs a lot of revision when applied to real, live people! After being in the home for less than a year, Rocky Mountain Housing informed us that they had completed their annexation, and that the house would have to be torn down. This came as a shock, as it was earlier than expected. I began a little argument with God – how could He put us in this beautiful home and then take it away? Three weeks later, Rocky Mountain Housing called and offered to give us the home – we just had to pick it up and move it off of their property! Now, of course, I thanked God abundantly, and then proceeded to question how one goes about moving a big brick house. Are there house movers in the phone book? God, in his wisdom, provided an amazing volunteer project manager who owned a construction company, and with his help I discovered that there are indeed, house movers in the phone book!

We were able to get a loan on the top half of the house (the basement would be plowed under), for $100,000. I thought that was a lot of money – not the last of my naïve ideas! We were told we could move the house within a seven mile radius. I began the search for land, and soon discovered just how far that $100,000 would go. It didn’t take long for the realtor to call me and tell me that there simply was no where we could go – even with all the money in the world, there wasn’t any land available within our parameters. Thus ensued another argument with God. How could he give us a house, and no land to move it to? With a heavy heart I went to work the next day knowing that I would have to inform the staff and residents of the bad news. But at 10:30 that morning I received a call from the pastor of a nearby church. He asked if we were the folks looking for land. I said yes. He then said that their church had some land that they would like to give to us! I nearly fell off my chair! We had never even met this man – a small group of people from the church had come to give us laundry soap and had learned of our dilemma. They informed the pastor, and he gave me a call. He asked us to meet him at the church. Two of us hopped in the car, and drove just five blocks and around the corner! There was the pastor, waiting for us near a large field beside a white steepled church building. He simply waved his arm at the land and said that they wanted us to have enough for the house and a playground, and then, with a wave of his arm, he said, “there you go, and now I have to go to lunch”! Of course, things got a little more complicated when the deacons got involved! Not to mention the city! But when God plans something, nothing can get in the way!

We would soon find out that the land we were being given had already been zoned for a group home 25 years earlier, when some folks in that church had the vision for a maternity home that they were never able to open. The church had been trying to put ministry on the land for 25 years, and things always fell through. It was incredibly humbling to realize that before I had ever been a teen mother, God had already arranged for the land that He would give us for our home for teen moms. From that point on, it was one miracle after another. Not that I didn’t spend plenty of time arguing with God for the next two years while all our teen moms and kids were crammed into a rental. I thought he should move quicker! Somehow, he always knows better, though. Had he simply given us an “Extreme Home Makeover”, none of the hundreds of individuals and companies who would take part in building Hope House would have experienced his awesome grace and provision. Almost every piece of that house would end up being donated, from the excavation of the basement to the top of the roof.

We were told that we would have trouble with the neighborhood meeting required to get our special use permit from the city. Instead, we had neighbors ask to volunteer. We were told that the City Council wouldn’t like the idea of a group home. After our meeting with the Council we had people follow us into the hall to ask to pray for us, and one City Council member joined our Board! During the building and renovation, the Project Manager would call and tell me what we needed next for the house. I would ask him how to spell that, where to get it, and who to call. Just one example was the day he told me we would need 13 four-foot egress window wells. I called a company listed in the phone book and the guy on the other end said “well, that’s crazy – we just had a guy cancel an order for 13 four-foot egress window wells. We’d be happy to donate them to you, and we’ll deliver them, too!”

Hope House truly is the “house that God built”. There isn’t any other way to describe it. When you visit now, you’ll find a place filled with laughter, and warmth, and little ones running up and down long halls and bouncing off couches in the living room. You’ll find staff members working hard with teen moms to complete GED’s, and master life skills, and healing hurts from the past. You’ll feel the energy and the hope in the air. You’ll also find us hard at work developing new programs to serve the thousands of teen moms in our state. And we continue to explore ways to partner with other service providers in our area, and nationally, to develop “best practices” and benchmarks for success for teen moms working to attain self sufficiency.

It has been an amazing journey thus far, and I have no doubt that God has many more surprises in store. I am continually amazed at the courage and spirit that our young moms show as they work to reach their goals. I have yet to meet a teen mom who didn’t want to be a good parent. They just need someone to show them a way and give them a little hope.

Hope House Northern Colorado is committed to transforming the lives of teen mothers around the world.

Hope House Northern Colorado empowers parenting teenage moms to strive for personal and economic self-sufficiency and to understand their significance in God’s sight, resulting in a healthy future for them, and for their children.

“Mission Increase is connected with a large number of ministries and yours stands out as a ministry that God is blessing and working through in tremendous ways. We believe in all that God is doing through your ministry to reach people’s lives and change them forever.”

2013: Lisa Steven named the Arvada Woman of the Year

2018: Hope House named the Nonprofit of the Year by the Arvada Chamber of Commerce 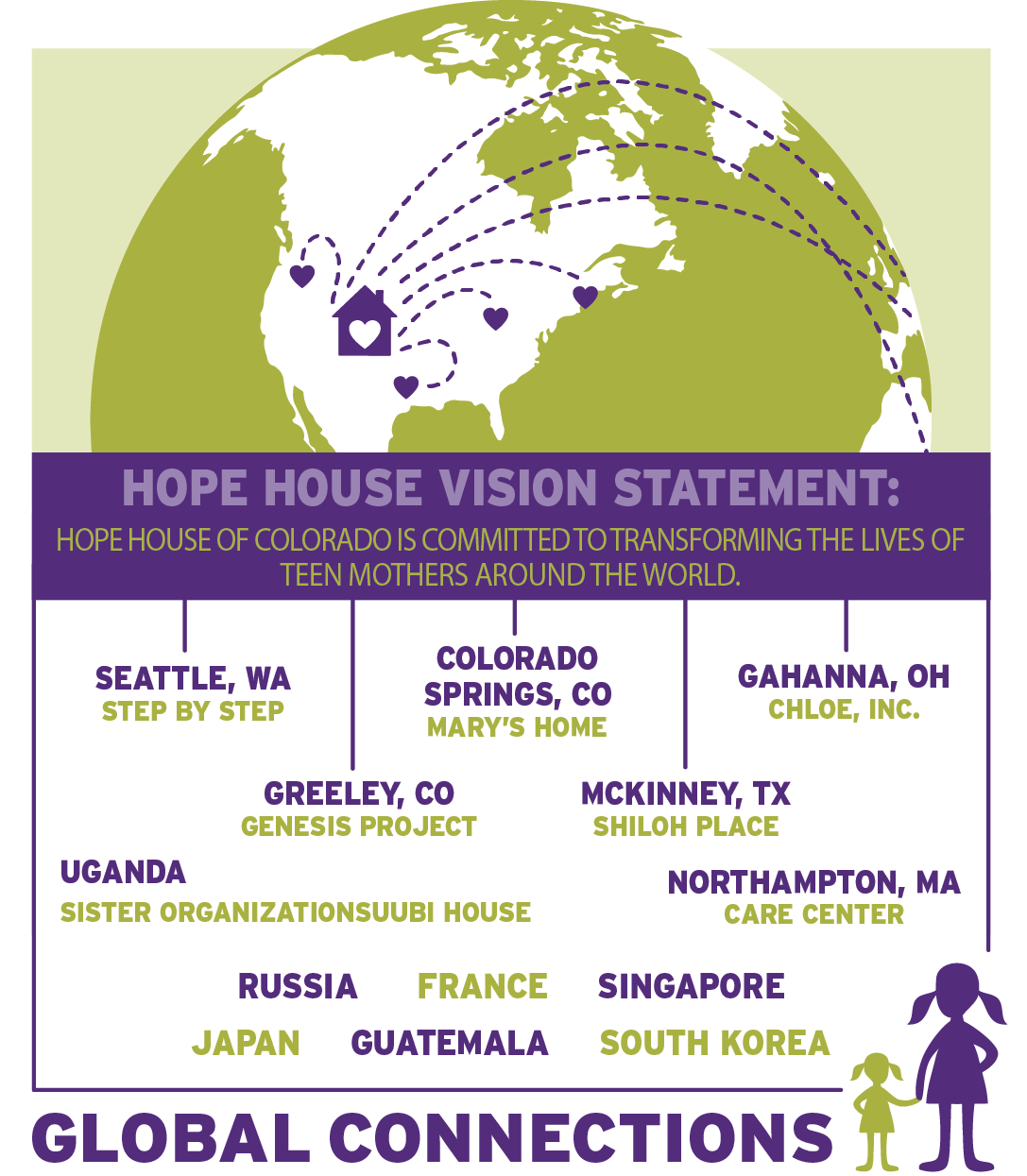 Hope House is committed to transforming the lives of teen moms around the world. As an open resource organization, every year approximately 12 organizations from across the globe either visit or contact Hope House for information and advice regarding empowering services for teen moms.

Our sister organization, Suubi House, a home and Resource Center for teen moms in Uganda.